You know when you try something for the first time and you are completely mesmerized by the new and wonderful flavors you are experiencing? That’s how it was for me the first time I had Musakhan. Prepared in the traditional way by a Palestinian woman, every Musakhan I had after that was just not the same. So over two decades after, I finally decided that I had to make it myself.

So I was watching the funny Bobby Chinn on his Middle Eastern food tour, and during his visit to Palestine, he visited a family that prepared him Musakhan. They had baked the special traditional bread, Taboon, for the dish. A quite thick and rustic unleavened bread that was baked directly on hot surface in an open flame oven. And this made perfect sense, this type of bread would soak up all the juicy liquids and still hold its form. So the bread was my first quest. In the old Jabriyah Co-op the traditional bakery sells Iranian bread that I guess would be somewhat similar to the Taboon bread I saw on TV. It’s thicker than the round Tanoor bread and oval in shape. So if you’re planning to make this dish head to the old Jabriyah Co-op and get two of those breads.

Next was to find the recipe. Online I found Dima’s Kitchen. She has three versions of the dish, one of which was similar to the one I saw on TV – sandwich style with the chicken pulled. Of course I experimented and modified, so here it is.

While the chicken is roasting, cook the onions in the olive oil on medium to low heat until softened. Add 1 cup of warm water and continue cooking until the water has almost evaporated and the onions have sweetened and become golden brown and soft, not brown and crispy. Mix in the sumac.

Cut the very ends of the breads to get somewhat of a rectangular shape. Place the bread in aluminum foil lined baking trays. Spoon equal portions of the broth to cover each bread until completely moistened. Then generously drizzle olive oil over the bread. Prick the bread with a fork so some of the oil and broth soak through the bread. 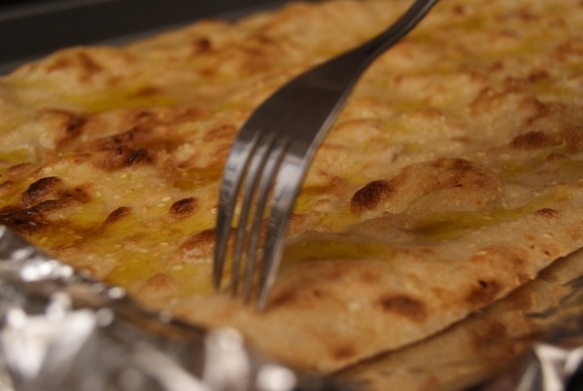 Sprinkle the pine nuts on top. Finally drizzly more olive oil on the edges of the bread.

Eat immediately! Otherwise, prepare the assembled the Musakhan and keep it covered and ready ahead of time. Bake it 15 minutes before you’re ready to eat.